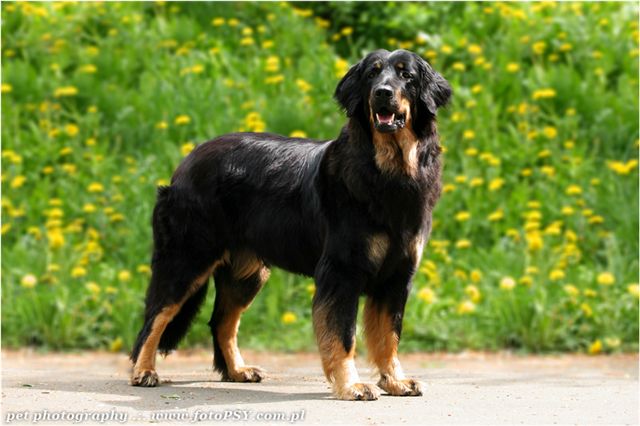 One of the most wonderful and titled Hovawart females in Europe.

Oh this my Vegas... I`ve been waiting for her more than 8 years and always something happened. Her name is of course in honour to her grandmother, e.i. Conny`s mother, the most brilliant female, I have ever known. Vegas is the true child of her parents (she has her luck to be brought up in full family ;-))) She came to the world as the first one - a big, indocile clammy. I was so happy and already then I said: here she is - my puppy, thank you Maggy ;-) Vegas - always hungry like Conny and always ready for endless races like Maggy ;-) I hope, she will follow in her outstanding ancestors` footsteps and will be the next starlet-Conny`s kid, who is the father and grandfather of the best offspring in Europe.

Nomen omen name means a lot ;-) Even in my secretest minds I`ve never presumed that Vegas achieves so much in such short time. At the age of only 9 months and 2 days she became World Junior Winner and Best Junior in Bratislava 2009 in numerous competition, of double older dogs from Czechy and Slovakia, where live most beautiful hovis in Europe and what more by finish judge, who have huge requirements ;-) I still can`t believe it ;-) Very soon after she became Poland Junior Winner and Best Junior in Poznań 2009, and on the beginning of year 2010 she finished Polish Junior Championship in 3 shows. Her first start on International Show in adult class with big competition finished with BOB and Cruft Nomination. As it was less, some days later she won VDH European Junior Winnership in Dortmund, began adult German championship, then she went over herself and on Jubilee Hovawart Club Show in Aarau in Swizerland in competition of 301 dogs she became Best of Breed, chosen collectively throught 6 breed specialists from Germany, Austria and Finland. It is uncommon precedent, that such a young dog, female more, won the biggest show in Europe ;-) Vegas - you don`t even know how proud I am of you! ;-)))

Meanwhile Vegas grew up and overgrew her mother, she is 65 cm tall, has uncommon movement, wonderful backline and head of her father Conny. She`s my shadow, always by me and following me, she has all the same behaviours like Conny, even she sleeps like he did ;-) She`s very temperamental, brave, tough and subjected in dogs` herd only her mother Maggy. She wants always to please me and wheedle, I know, she will do everything for me ;-) In July 2010 Vegas was examined for hips and elbows displasia, both results excellent. In April and May 2011 Vegas was examined in Germany towards eyes and heart diseases - she is fully healthy, owns european certificates. November 2011 she passed with excellent note mentality tests without any preparation, thanks to she fullfiled all requirements for breeding female. In July Vegas passed also OB 0 exam, in March 2011 also PT1 (polish obedience exam) with nice result of 190/200 points. In May 2012 we passed PT2 exam. In November 2012 Vegas passed with very nice score BH (57/60) and IPO1 exam: 89/90/93 = 272 points, note very good. My dream came true ;) We planed to finish aduld Polish Championship on 10th October 2010 and we managed that, Vegas was on that day only 21 months and 3 days old. Show season 2011 lasted for Vegas only 2 months but with what successes ;-) All we have planed, we managed to fullfil in 100%. In May 2011 at the age of 2 years and 4 months Vegas finished Show Interchampionship C.I.E. after victories in Katowice, Luxembourg (where she won Best of Breed title, Luxembourg Championship and next Cruft`s Qualification) and in Dortmund. Dortmund appeared very lucky for us, cause Vegas managed to finish adult German VDH Championship in one year and one day, and more to get adult VDH European Winnership! It is hard to believe in all of this. I envy myself such wonderful female, which except of beauty, has also grate mentality.

In July 2011 Vegas became mother for the first time of 11 wonderful pups, whose father ist well known Kalisto vom Gablitztal. Puppies look very promising. I hope, her offspring will be also so successful, when not better from her ;-) In the end year 2012 they can boast about: 3 Poland Championships, Luxembourg Championship, German VDH and HZD Club Junior Championship, Luxembourg Junior Championship, 3 Poland Junior Championships and the most important - German Junior Club Winnership Meisdorf 2012, and in year 2013 came two victories in Dortmund - Dortmund Frühjahrssieger`13 i Herbstsieger Dortmund`13! Bravo F-pups!

Year 2012 was devoted to trainings, Vegas passed very nice IPO1 exam, what confirmed her excellent mentality. Vegas was showed in Poland. She won 5 Best of Breeds, 4 CACIBs, became Poland Winner 2012 and Best of Breed, got third Crufts qualification, and on the show in Koszalin got 3rd place in BIS

In year 2014 Vegas gave birth to her third litter from mating in Sweden - 8 wonderful puppies, which live in 4 countries. Four of them have made great show careers, winning many exhibitions. We have black female Luka at home. From this litter we have two Interchampions, Champions of Estonia, Belarus, Lithuania, Latvia, Belgium and Poland.

In year 2016 Vegas gave birth to her last litter from mating in Finland, certainly one of the best litters in our kennel. Four puppies show up and everyone wins the largest and most significant exhibitions in Europe. We have black and gold female Vera at home, who is currently the biggest star of our kennel. From this litter we have three Interchampions, Champions of Belgium, Luxembourg, the Netherlands, Germany, Slovenia, Croatia, Austria and Poland. Dogs from this litter win the largest exhibitions in Europe, winning the titles of FCI and VDH European Junior Winner, German Junior Winner, German Winner, Austrian Bundessieger, multiple Amsterdam Winner / Netherlands Winner, Netherlands Club Winner, Netherlands Junior Club Winner, Finland Junior Club Winner, etc.

What's most important about Vegas's offspring is that all her children are healthy, x-rayed and free of dysplasia and other genetic diseases. Vegas turned out to be a great mother and an excellent breeding female. 7 of her children were used in the breeding, her grandchildren are also very successful. Vegas is currently enjoying her dog's retirement, celebrating her 11th birthday in year 2020, her entire siblings are still in good shape.